Labyrinths are often seen as a metaphor for confusion. Theseus chases the Minotaur through a labyrinth; Jung talks of the labyrinth of the unconscious mind. Actually these are examples of mazes, not labyrinths. A maze is a web of tracks designed to confuse and disorient:  false turns and dead ends conspire to get you hopelessly lost. In a labyrinth, your path may twist and turn, but there is only one route.  If you follow the way, you will inevitably come to the centre. Labyrinths are a symbol of the soul’s journey: keep going, and you will find your true destination. 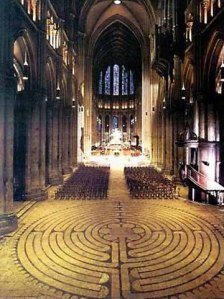 Labyrinths have been marked and walked since ancient times. They feature in spiritual traditions from around the world as a method of obtaining enlightenment. Usually they are in the form of two-dimensional patterns marked on the ground. They may be spiral, symmetrical or random meanderings. Early Christian churches feature labyrinthine patterns as a representation of human life, with the centre symbolizing salvation. In medieval Christianity, walking the labyrinth was a form of symbolic pilgrimage: religious rituals were conducted on the patterned floors of great cathedrals such as Chartres and Amiens. Nowadays ‘labyrinth workshops’ in both Christian and New Age traditions hark back to this ancient source of spiritual insight. 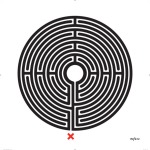 London Underground are installing a labyrinth in every station to commemorate their 150th year. The series of 270 black-and-white enamel plaques has been designed by Turner-winning artist Mark Wallinger. Each one is unique but they are all circular, and have a single starting point. The first ones were put up today and by summer 2013 they will all be in place. The designs will be numbered for the station to which they are assigned: this is their position in the ‘Tube Challenge’ – the route by which you can visit every station in the shortest possible time. Well, we each have our own spiritual journey….